The Western Dedicated Freight Corridor covers a distance of 1504 km of double line electric (2 X 25 KV) track from JNPT to Dadri via Vadodara-Ahmedabad-Palanpur-Phulera-Rewari. Alignment has been generally kept parallel to existing lines except provision of detour at Diva, Surat, Ankleshwar, Bharuch, Vadodara, Anand, Ahmedabad, Palanpur, Phulera and Rewari. The Western Corridor passes through 5 states as follows:-

However, it is entirely on a new alignment from Rewari to Dadri. The Western DFC is proposed to join Eastern Corridor at Dadri. Junction Stations between the existing railway system and the Western DFC have been provided at Vasai Road, Kosad/Gothangam, Makarpura (Vadodara), Amli Road (Sabarmati), Palanpur, Marwar Jn., Phulera, Rewari and Pirthala Road. More than 300 kms of track completed from Rewari-Madar and trains are running on trial basis.

The traffic on the Western Corridor mainly comprises of ISO containers from JNPT and Mumbai Port in Maharashtra and ports of Pipavav, Mundra and Kandla in Gujarat destined for ICDs located in northern India, especially at Tughlakabad, Dadri and Dandharikalan. Besides Containers, other commodities moving on the Western DFC are POL, Fertilizers, Food grains, Salt, Coal, Iron & Steel and Cement. Further, owing to its faster growth as compared to other commodities, the share of container traffic is expected to progressively increase and reach a level of about 80% by 2021-22. The rail share of container traffic on this corridor is slated to increase from 0.69 million TEUs in 2005-06 to 6.2 million TEUs in 2021-22. The other commodities are projected to increase from 23 million tonnes in 2005-06 to 40 million tonnes in 2021-22. As a result, the maximum number of trains in the section is projected as 109 trains each way in Ajmer-Palanpur section.

It is proposed to set up Logistics Parks at Mumbai area, particularly in the vicinity of Kalyan-Ulhasnagar or Vashi-Belapur in Navi Mumbai, Vapi in southern Gujarat, Ahmedabad area in Gujarat, Gandhidham in the Kutch region of Gujarat, Jaipur area in Rajasthan, NCR of Delhi. These locations have been selected on the basis that these have a good concentration of diverse industries and constitute major production/consumption centres. These are also well connected by rail and road systems for convenient movement in different directions. These parks are proposed to be developed on Public Private Partnership mode by creating a sub-SPV for the same. DFCCIL proposes to provide rail connectivity to such parks and private players would be asked to develop and provide state of the art infrastructure as a common user facility.

As per RITES project report, the traffic that would move on the Western DFC, excluding the base year traffic (2005-06), is projected as below 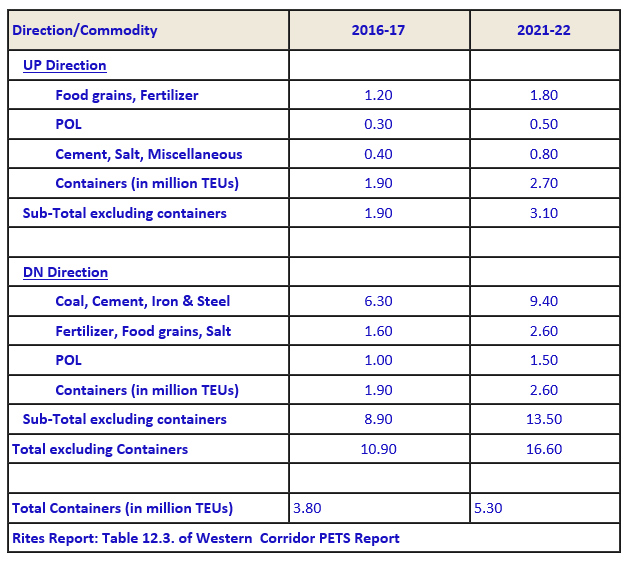 For Western Corridor, the tendering strategy will be broadly as below:-

The Nationality of the bidders under Special Terms for Economic Partnership (STEP) Loan of JICA shall be governed by following stipulation:

1. Japan in case of the prime contractor;

2.All countries and areas in case of the sub-contractors.